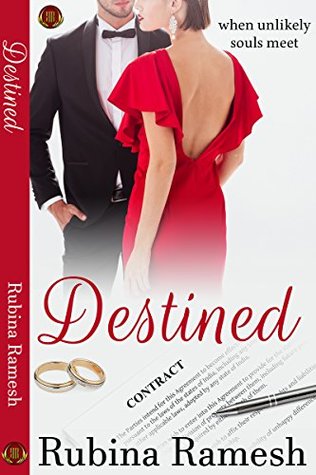 Unexpected twists and turns makes our life more interesting and thrilling..In this book, Author talks about the way in which fate changes the lives of Esha Mehra and Rohan Sharma..”Destined” is a story of  love, relationships, trust, commitment and self respect..

Esha Mehra is shocked when she finds out that her father has cancer..She is worried as she had already lost her mother to same dreadful disease..Her fiance and childhood friend Ayush is indifferent towards her father’s health.He and his mother feels that it’s not Esha’s responsibility to take care of her father as she is a daughter..Esha feels offended and upset on their insensitivity and ends her relationship with Ayush..

She meets Rohan sharma, her boss, to discuss about availing loan from office..She is surprised when Rohan has different plans..He asks her to agree for  a contractual marriage with him just for six months..He says that he will take care of her father’s medical expenses if she agrees for marriage..She accepts and they get married..Rohan’s secret behind his sudden plan and whether they are able to live happily or not makes this story very much interesting to read..

I loved the way in which Author had portrayed the character of both Esha and Rohan..They are independent, head strong  and likable..Esha’s self respect and her way of facing problems makes her special..Her responsibility and commitment towards her parents’ health is commendable..Author had beautifully narrated the relationship between Esha and Rohan.

Author talks about the way this society wrongly perceives that a daughter is not responsible for taking care of her parents..It’s time to change this narrow mindedness of many people who think like this..

Overall, I feel that this book is good, interesting and engaging to read..

Disclaimer: I received a digital copy of book from the author in return for my honest review..I didn’t receive any monetary compensation for the same.

© Sadhuvi and https://sadhuvi.wordpress.com -Unauthorized use and/or duplication of this material without express and written permission from this site’s author and/or owner is strictly prohibited. Excerpts and links may be used, provided that full and clear credit is given to Sadhuvi and https://sadhuvi.wordpress.com with appropriate and specific direction to the original content.

I am a Proud Member of :